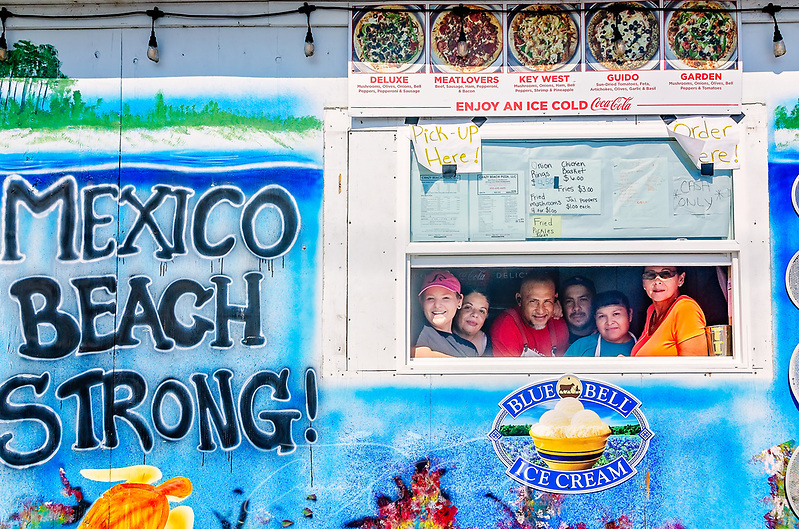 Employees gather at a window beside a “Mexico Beach Strong” mural at Crazy Beach Pizza, Sept. 27, 2019, in Mexico Beach, Florida. The business was damaged by Hurricane Michael in 2018 but is now operating again. (Photo by Carmen K. Sisson/Cloudybright)

MEXICO BEACH, Fla. — They came from Tallahassee and Atlanta and places in between, clutching photos and memories of better days. Hammers stilled, and saws fell silent. Shops emptied and the streets filled as people emerged from motor homes and trailers, lugging lawn chairs and laughing, half in nervousness and half in relief.

They had waited for this day, the one-year anniversary of Hurricane Michael’s pillaging of Mexico Beach. After 365 days of sorrow, the community was ready to celebrate its progress the best way it knew how – by coming together for a block party. 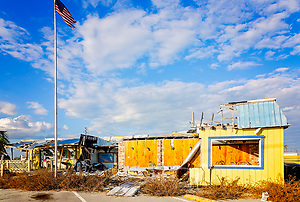 A tattered American flag flies in front of The Fish House restaurant, which was destroyed by Hurricane Michael in 2018, Oct. 8, 2019, in Mexico Beach, Florida.  (Photo by Carmen K. Sisson/Cloudybright)

The seaside town was just a dot on the map before the Category 5 hurricane swept ashore with 160 mph winds pushing a 17.5-foot storm surge, obliterating everything in its path. It was a hidden jewel on Florida’s Forgotten Coast, and the residents – 1,072 based on the 2010 U.S. census – aimed to keep it that way. Now, with a storm-scoured slate, they are even more fiercely protective of their city. They’re not looking to rebuild bigger, just stronger.

From the city’s inception in 1949, everyone agreed there would be no flashy condominiums or entertainment district, no traffic lights or big-box convenience stores. Mexico Beach would not cater to tourists. Visitors would come for the natural attractions of surf, sea, and sand, or they would keep heading west toward Panama City. The commitment paid off in the form of families who returned to the quiet beach year after year, creating a summertime swell of as many as 5,000 people.

Mayor Al Cathey estimates that fewer than 400 people were in town this past summer. Most were residents dividing time between rebuilding their homes and fighting insurance adjusters for claims that often yielded half what contractors said was needed.

The tourists did not come. With 85% of the structures in town either heavily damaged or destroyed, there was little to bring them back.

The city’s largest hotel, El Governor, remains under construction, gaunt, with gaping holes where windows and doors once were. 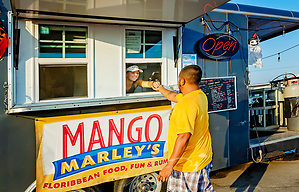 The parking lot where residents are gathering today is the new hub, where a black trailer serves “Floribbean food” in front of the still-damaged restaurant.

Resident Morgan Fyffe remembers family vacations so beloved that both she and her parents decided to make Mexico Beach their permanent home. They evacuated but returned to a place they didn’t recognize. The damage was so extensive it was hard to distinguish roofs from walls from boats from cars. Everything was broken, covered in mud, strewn across the streets, flung into the canals, thrown amongst the trees. And oh, the trees – once creating a lush pine forest surrounding the city, now snapped into right angles, a harsh geometric harbinger of the heartbreak that lies beyond.

As her parents made their way back to Mexico Beach from Georgia, dodging debris, Ms. Fyffe traversed a different route, fighting mounting unease. They had planned so well, securing the property and evacuating with military precision. In the end, it didn’t matter.

“Everything was wiped out,” Ms. Fyffe says. “Architects make plans, but the ocean has its own plans.”

Now she works at Mango Marley’s, which has dropped from 26 employees to six. She and co-worker Jason Hart serve a limited menu of grab-and-go lunches for the hordes of contractors who show up daily. 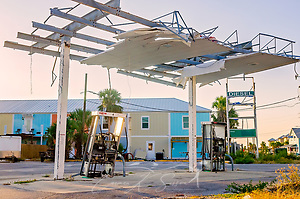 If she let herself, she could give in to despair, but instead, Ms. Fyffe concentrates on the future. New condominiums, houses, and businesses are sprouting every day. She isn’t worried about what Mexico Beach will become because she knows what it was and she believes the community will fight to keep its “seaside Mayberry” safe from outside interests.

She gets frustrated when she sees people gawking at the destruction, snapping photos with their cameras. She doesn’t want to talk about what happened to Mexico Beach. Locals are tired of being a spectacle, she says.

“We’re the show ponies of the hurricane,” she says with a trace of frustration edging her soft voice. “It feels like our lives are on display.”

Her colleague Mr. Hart grew up in Mexico Beach, and he instinctively avoids the never-ending stream of reporters, storm chasers, and disaster buffs.

He, his wife, and his two children are living with parents in St. Joe Beach. There are few places to live, and rent has soared to as much as $2,000 a month for an average two-bedroom house.

“People come in and ask if I knew anyone who died,” Mr. Hart says, gazing across the now-serene Gulf of Mexico. “It’s a small town. Everyone knew everyone. What do you think?”

Kenzie Wood just got a job at Crazy Beach Pizza, another restaurant that is back in business. She recalls an idyllic childhood hanging out with friends at the beachfront arcade, building bonfires, and mingling with hotel guests, listening to their tales from faraway places.

“Me and my friends would walk the beach at night, and it was a safe, small town,” she says, wiping down a picnic table. “I’ve had the same group of friends since first grade. I thought, ‘There’s no way this is happening to us.’”

“I’m praying to God it doesn’t end up like Panama City Beach,” she says. 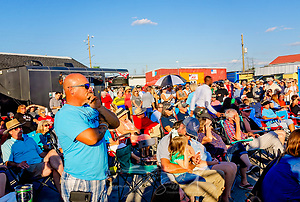 But at the first-anniversary party, everyone has set aside their fears. Residents pack the parking lot, wearing shirts with slogans like, “Stronger than the Storm” and “Make Mexico Beach Great Again.”

As Mayor Cathey takes the stage, people scribble words of gratitude to hang on a fence and children chase one another, their laughter rising in the air and spreading across the crowd.

Now in his 70s, Mr. Cathey has lived in Mexico Beach since he was 4. His family helped found this community, and his love for it is as deep as the ocean. He looks tired but resolute, wearing a “Never Forgotten Coast” T-shirt that depicts the state of Florida with a heart.

He stands before his friends and neighbors, feeling the pain they are feeling because he is living it, too. And yet there is hope, and he wants to make sure they know that so deeply that there will be no question of whether they will stay.

“We could sit here and talk about what we had and what we lost, but I think it’s more important that we talk about what we will have again,” Mr. Cathey says. “The city of Mexico Beach is nothing more than you. I don’t think there’s any question of, ‘Do we have an identity crisis?’ We truly know who we are and what we want to be.”

He pauses and almost breaks down. The months have been hard, the days long, the nights dark. Recovery will take years. 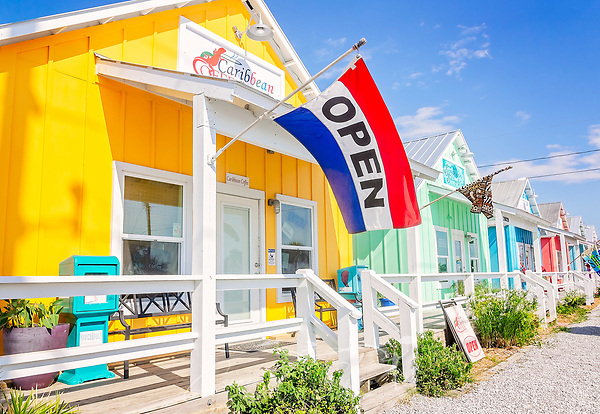