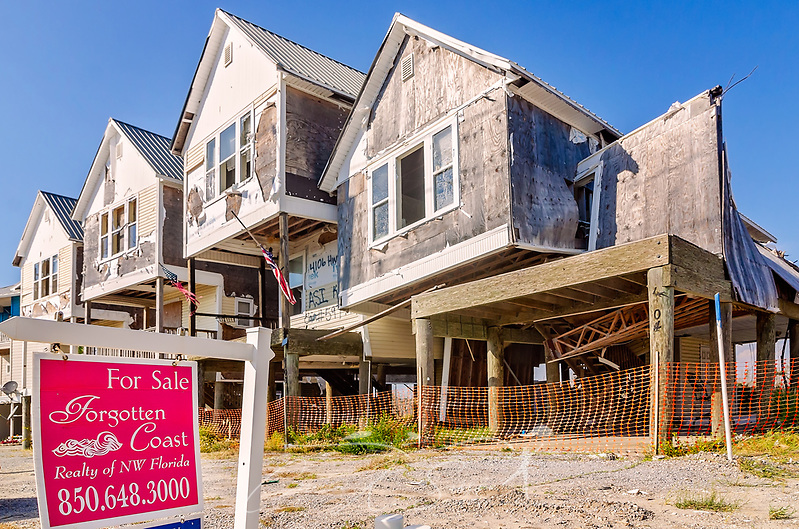 A realty sign stands outside condominiums damaged by Hurricane Michael in 2018, Sept. 27, 2019, in Mexico Beach, Florida. Nearly half the town’s 1,900 homes were damaged or destroyed by the category five hurricane. Many homeowners remain in limbo as they wait for money from their insurance companies or the Federal Emergency Management Agency to pay for repairs or demolition. (Photo by Carmen K. Sisson/Cloudybright)

But there are other colors, too, not so cheery. Blue tarps cover roofs and red-lettered “for sale” signs proliferate like a virus. The city is still struggling to regain its footing a year after Hurricane Michael’s ruthless assault left 852 of the town’s 1,900 homes substantially damaged or destroyed. 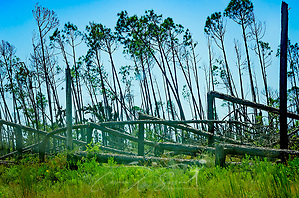 Pine trees are snapped in half or leaning as a result of 2018’s Hurricane Michael, Sept. 24, 2019, in Mexico Beach, Florida. More than 2.8 million acres of timber were damaged by the category five hurricane. (Photo by Carmen K. Sisson/Cloudybright)

Half of the city’s 1,200 full-time residents haven’t returned. Hurricane Michael demolished 85 percent of the structures in Mexico Beach last October, wiping foundations clean of vacation homes and cinder-block cottages, ripping roofs and exterior walls from businesses and scattering the contents among thousands of tooth-picked long-leaf pines.

Tourism is the main economic driver of Mexico Beach, and most summers, the population swells as high as 5,000. This summer, the mayor estimates, only 400 people were here.

At the Mexico Beach Welcome Center, Melissa Williams mops the floor and straightens stacks of brochures inviting visitors back to the seaside community.

Lately, she dreads going home to her storm-damaged house. She loves Mexico Beach, but some days, she thinks the sadness will suck her under as surely as Category 5 Michael swallowed everything in its path.

Her husband, Craig Williams, had to work the night of the storm, so she took refuge at a friend’s house. Together, three women, three cats, three dogs, and one cockatiel huddled on the third floor and watched movies until they lost power. 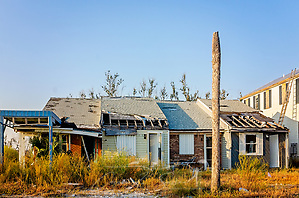 Condominiums that were damaged by Hurricane Michael in 2018 remain standing, Sept. 27, 2019, in Mexico Beach, Florida. (Photo by Carmen K. Sisson/Cloudybright)

When Michael’s 160 mph winds threatened to blow out the French doors, the women secured them with a bungee cord and prayed the roof wouldn’t go.

Later, they emerged to a new world. A broken world. A dingy, mud-flecked landscape where roofs lay strewn across roads and boats rested uneasily in living rooms no longer suitable for living or anything other than demolition.

That’s another sign you see a lot these days: “OK to demo” spray-painted across sheds, shops, houses, and buildings so shattered that outsiders can only guess what they must have been.

At first, the Williams home seemed okay. They spread a tarp across the roof and called themselves lucky.

They were wrong. One night, as Melissa and Craig lay in bed talking, they noticed a sickening odor — mold, creeping inside the walls, remaining hidden until it was too late to do anything but rip apart the entire house.

Like other Mexico Beach residents, they were eager to begin repairs but were told to wait for their insurance company to settle. Appraisers set an estimate; insurance adjusters offered half of what was needed; litigation began.

And life ground to a halt as the couple sat in limbo, unable to move forward, unwilling to let go.

She is 63; he is 60. They moved to Mexico Beach in 2006 because they enjoyed camping along the Forgotten Coast. Now they camp every night in a travel trailer beside their home. This wasn’t part of their retirement plan.

The story is the same across Mexico Beach. The city’s operating budget is $3.5 million. It cost $30 million to remove debris from the canals, and total restoration is expected to top $239 million.

But city officials haven’t given up hope. They’re quick to point out that because many homes were rentals owned by out-of-towners, the owners don’t have the same urgency to rebuild as permanent residents. Right now, there’s not a lot to bring them back. 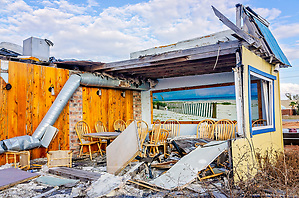 A picture of Mexico Beach in brighter days hangs inside The Fish House restaurant, which was destroyed by Hurricane Michael in 2018, Oct. 8, 2019, in Mexico Beach, Florida. (Photo by Carmen K. Sisson/Cloudybright)

The closest gas station is 11 miles away. When residents want groceries, they have to go to the Dollar Store on St. Joe Beach or make the 20-minute drive to the Piggly Wiggly in Port St. Joe. There is no lodging. El Governor, the most famous of the original four hotels, now offers expanded views of the Gulf of Mexico — right through the bare walls, open windows, and yawning doorways.

You can get lunch at Crazy Beach Pizza or a hamburger from the Mango Marley’s food truck, but the seafood restaurants and bars are gone. The pier is history. The souvenir shop is no more. The bank operates out of an armored trailer. The city police department — unable to recover from losing its building, patrol cars, and equipment — disbanded last month during a fractious city council meeting that ended with the Bay County Sheriff’s Office taking over after a 3-2 council vote.

The one location that’s thriving is Ace Hardware, owned by Mexico Beach Mayor Al Cathey. It’s a bitter pill to swallow. Unlike many business owners, he has a steady stream of customers, but they’re all buying plywood and nails to restore their own homes and workplaces to functionality.

It’s hard to ignore the realty signs dangling in front of storm-scoured, weed-strewn lots. If you attempt to count them all, just along the five-mile stretch of Highway 98, you will quickly lose track. If you drive down the side roads — none of which have street signs now — you’ll find so many for sale signs that you will give up the endeavor. 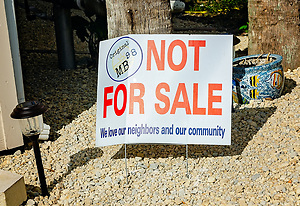 A “not for sale” sign stands outside a condominium, Sept. 27, 2019, in Mexico Beach, Florida. (Photo by Carmen K. Sisson/Cloudybright)

But there is another sign in Mexico Beach that offers a glimmer of hope: “Not for Sale.” Some residents, weary of the daily onslaught from deal-driven developers, decided to issue a strong message to opportunistic outsiders: “Original 98 MB Not for Sale: We love our neighbors and our community.”
That doesn’t surprise Mayor Cathey. His family was among the first to settle in the area after the city’s founding in 1949. He recalls that as a child his parents and neighbors would remind one another to “guard the gates.” From the beginning, they worried about the impact of commercialism and rampant residential development. The mantra kept them focused, and they enacted regulations that ensured the quality of life they wanted then and that residents treasure now.

He thought of that after the hurricane as he stumbled through the city he has lived in for most of his 71 years, no longer able to find his way around because the landmarks are gone.

“We’re vulnerable,” Cathey says. “We could become something we don’t want to be.”

He sees the “not for sale” signs as a modern version of guarding the gates. Though developers harassed residents for the first month, they met harsh rejections and eventually gave up.

But as time drags on, and work on individual homes remains at a standstill, some residents are giving up, too.

Melissa and Craig Williams had intended to keep their property. This past week, they placed their home on the market. They want to stay in the area, but they say they don’t have the heart to rebuild.

“We’re tired,” Melissa says, her eyes filling with tears. “At our ages, we just didn’t want to do it. It’s not that we hate Mexico Beach. We want to stay. But it’s depressing. People think we’re all good, but we’re not good, even a year later.”

Perhaps they’ll buy another house, she says. Or maybe they’ll buy a vacant lot and put their travel trailer on it. If another storm comes, they’d be able to drive away. At least they wouldn’t lose everything. 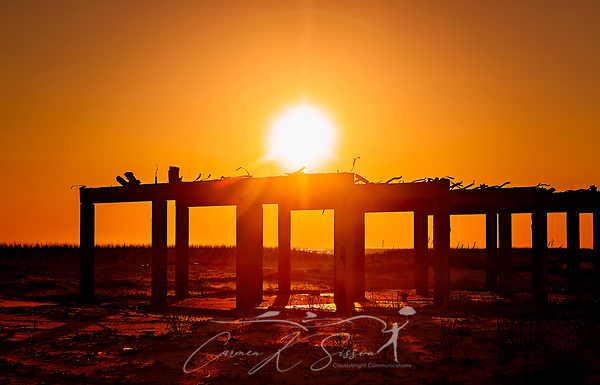 The sun sets on a beachfront condominium destroyed by Hurricane Michael in 2018, Sept. 27, 2019, in Mexico Beach, Florida.  (Photo by Carmen K. Sisson/Cloudybright)