Willie Gray and Vickie Flournoy sort through family photographs Thursday afternoon at Flournoy’s home in Columbus. They have amassed a thick folder of information during the search for their sister, Lyrian Wyvonne Barry, who disappeared in the summer of 1960. (Photo by Carmen K. Sisson/The Commercial Dispatch)

COLUMBUS, Miss. — Everything was going to be OK, she said. Better than OK. The past few years had been tough, but she was tough, too, and she was going to make it. Wronged in so many ways, she was going to finally set things right. Build a new life for herself and her eight-month-old daughter.

There is a long pause and the sound of a dog barking in the distance as Betsy Hurt clutches the phone in Raleigh, N.C., and tries to remember what her sister was wearing that day.  It has been almost 53 years, after all. There have been births, deaths, cancer scares and graduations. Time did not stop, though sometimes the family wished it might, if for no other reason than to give them a chance to catch up. To rewind. 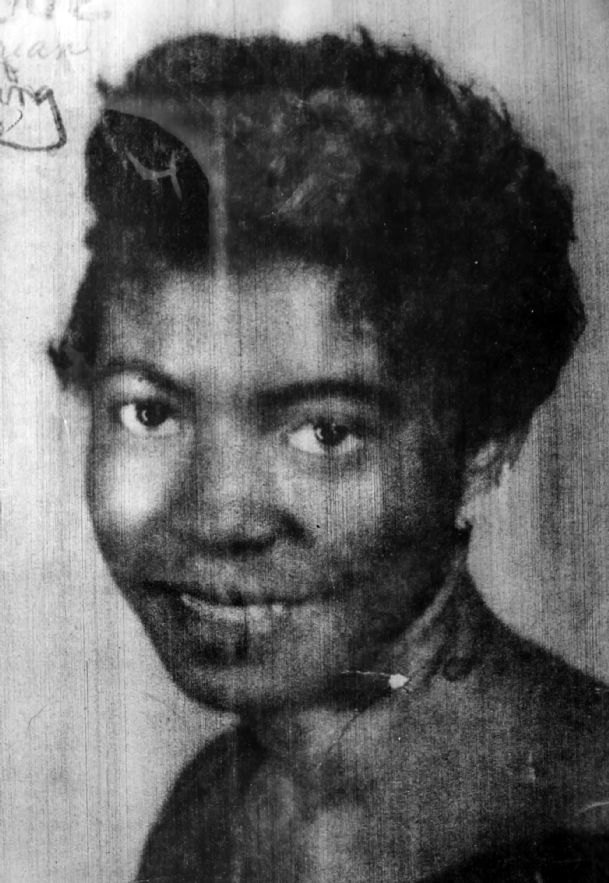 Lyrian Wyvonne Barry is pictured in her Hunt High School graduation photo, circa 1956. Barry disappeared in the summer of 1960. (Photo by Carmen K. Sisson/The Commercial Dispatch)

“I don’t know,” Hurt murmurs finally, her Southern accent chiseled away by too many years up North and the flow of a life that had to go on. “I was concerned, because our mom was at work and didn’t know she was going. But she said she wanted to leave because she wasn’t as strong as me. She wasn’t able to just pick her life up and go on.”

Not in a small town like Columbus, anyway, where everyone was all up in everybody else’s business.

After high school, she had met a New Orleans boy, Eulice “Eddie” Stallings, and went down there with him for a while. When things went sour, she came back home, this time with a baby, who she named Gloria.

Before long, Stallings was in Columbus again, too, and they picked up their rocky relationship where they had left it. Her family tried to visit, and she always seemed happy to see them, but as soon as he came home, it was clear he wanted them out.

“He was on drugs, doing drugs, selling drugs,” Hurt says. “She’d be sick at times and my mom would question her if she was taking anything, if he was doing anything to her.”

They weren’t even sure if the couple was married. Initially, she said they were, but on the night she called her parents to come get her and Gloria, she said they weren’t. Hurt helped her pack her things while their parents, Laura and Willie B. Gray, stood in the living room and talked to Stallings, who was angry and didn’t want her to go.  Before long, she was sneaking around with him again.

And this is where the narrative begins to unravel.

Hurt remembers Stallings also seeing other women, and she remembers her sister spending a lot of time with a distant relative, Sonny Lucas, who was bouncing back and forth between St. Louis and Columbus.

And she remembers the night Stallings married someone else — a hurried “shotgun wedding” with a girl who said she was pregnant with his baby. Hurt and Barry sneaked down to the house where the ceremony was being held and crowded into the back room, watching.

The plan was for her to stay with an aunt while looking for work. Hurt was pregnant, and Barry was supposed to return to Columbus in August when the baby was born, and they would go back to St. Louis together.  They were happy that day as they chattered in the taxi on the way to the bus station.

Everything was supposed to turn out OK.

Vera Flournoy and Willie M. Gray, Barry’s younger siblings, sit in Flournoy’s living room, sifting through family photographs and the residue of a 53-year search that has not ended and, they vow, will never end as long as they are alive.

They were in grade school when Barry disappeared, but like Hurt, they still miss their quiet, serious older sister who always preferred to be home more than anywhere else. There were eight children — four girls and four boys — and they were so close that no one could imagine her just up and leaving without a trace.

The aunt in St. Louis said she stayed with her briefly, then saw a newspaper advertisement for a live-in maid and took off for either Needham, Mass. or Bridgeport, Conn. She couldn’t remember which city, but she did remember one thing: Lucas, the distant relative-turned-paramour, had returned to St. Louis, too. The night Barry left, she and Lucas’ wife got into a “knock-down, drag-out” fight.

And this is where the trail goes cold.

Hurt confronted Lucas when he returned to Columbus, but he was “drunk, drunk, drunker than drunk,” and said he would tell her later what happened. When she went back to see him, Lucas was gone.

The family waited, believing Barry would call or write. They didn’t file a missing persons report, because they weren’t certain she was missing. She was in her early 20s, a grown woman capable of choosing her own destiny — unless something bad had happened. And that was unthinkable, so they pushed it out of their minds and waited some more.

Every once in a while, Hurt would see Stallings around town, and he would always say the same thing: “I can’t stand to be around you, because you look so much like her.”

Someone said they saw her in Chicago. A tip pointed to a lady in Massachusetts, who said a young black girl worked as her live-in maid for about six months, but she couldn’t remember her name or anything about her. Someone said she had been found in a mental hospital in California, where Stallings had since moved.

When Stallings was found dead, Hurt’s hopes of finding her sister died a little, too.

Barry would be 76 now. Her parents are dead. A brother is dead. Her baby, Gloria, is dead.

But she still has six siblings who miss her, Hurt says. They don’t want her to come home if that isn’t what she wants, they just want to know she is OK. In their hearts, Hurt and Flournoy believe she is dead. As Flournoy says this, Gray hunches forward as the words dig beneath his ribs and find their place inside his head, where his big sister is still very much alive.

“I never gave up hope,” he says quietly. “I’ve always been holding that hope.”

Everyone coped in different ways. 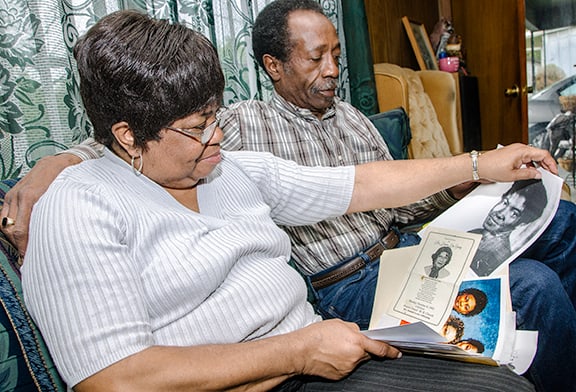 Vickie Flournoy and Willie Gray sort through family photographs Thursday afternoon at Flournoy’s home in Columbus. They have amassed a thick folder of information during the search for their sister, Lyrian Wyvonne Barry, who disappeared in the summer of 1960. (Photo by Carmen K. Sisson/The Commercial Dispatch)

Flournoy became an armchair detective. She shakes loose a sheaf of letters from the Social Security office, some yellowed, some crisp and white. The wording differs from year to year, but the context is always the same: They are unable to forward a letter to Barry, because no address has been found. There is no death certificate. There is no evidence anyone has ever used her Social Security number.

Stallings went to prison twice for drugs, so maybe Barry supplied the evidence and is now in the Witness Protection Program, Flournoy says, her eyes drowning the hope in her voice.

Hurt became an armchair publicist, trying to get the national media interested in the search. For years, her sister appeared to her in dreams. She was always scared, begging for help. Then one day, the dreams stopped.

She tried to get a Missouri detective interested in reopening the case. He told her he wasn’t even born in the 1960s, but he would take her phone number and let her know if he heard anything.

Their parents chased every lead until they worried themselves to death. They insisted on keeping the same phone number, in case she called. From time to time, a fly-by-night private investigator would claim to have new information, and they would reach for their wallets. The children finally had to tell them they were being scammed.

And then there was Gloria, the baby Barry left behind. Everyone else had their memories to console them. All she had was a question: Why?

It nearly drove her mad. Every Mother’s Day, she drew the shades and hid within her house, unable to face the churches and restaurants packed with mothers and daughters sporting fancy hats and happy smiles. Even her own two daughters could not erase the sting of abandonment.

At the age of 50, her heart gave out. And the pain was over.

Strangely, Barry’s absence has been the glue that has bonded a tight-knit family even closer. The remaining siblings, flung across the country, call one another almost every day. They talk about her all the time.

She wouldn’t have just left, they say. Their parents instilled so much love in them, that she could not have willingly walked away and left them all behind.

They could have long ago had her legally declared dead, and in some ways, that might have brought the closure they seek. But in the end, they couldn’t bear to seal the tomb for fear there would be no Resurrection.

And so they wait.