Home Recent Bylines The long road to the Obama inauguration, Knox Part 2 of 3

The long road to the Obama inauguration, Knox Part 2 of 3 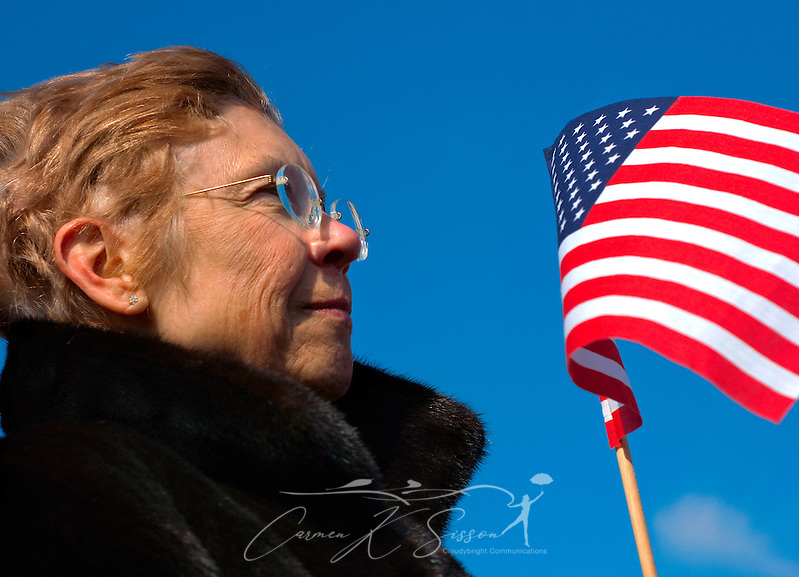 An elderly woman watches the proceedings at the Washington Monument in Washington D.C.’s National Mall during Barack Obama’s inauguration Jan. 20, 2009. An estimated one million people attended the event. (Photo by Carmen K. Sisson/Cloudybright)

SELMA, Ala. — The night Frankie’s mother didn’t come home, she suddenly knew how far her mom would go to bring about change. It was 1962 in Selma, Ala., and she was only 9. The idea of change enthralled her, even as a youngster. But at the moment she just wanted supper. And her mother had gone out to get a few last-minute items.

Frankie stared across the dining-room table at her father, her eyes asking an unspoken question – where is she? Then the phone rang. Her mother wasn’t at the grocery store. She was in jail. Ruby Walker had been arrested on the steps of the local courthouse with several others who were demanding equal voting rights for black citizens. At the time, more than half of Selma’s residents were black, but, given the phalanx of institutional and racial barriers, only 1 percent were registered to vote.

The protesters wanted to change that, to stop the intimidation and harassment, and eradicate the division between the races, which still left them shuffling through the back doors of doctor’s offices and restaurants. 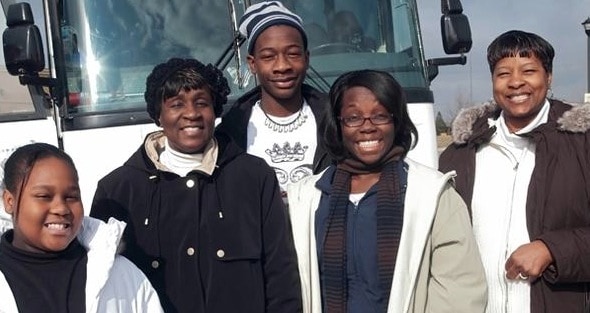 It’s an indelible memory that Frankie, now the Rev. Frankie Hutchins, will be carrying today as she stands on the National Mall in Washington with more than a million others to watch the inauguration of the first African-American president.

As one of the adults traveling this week from Selma to the nation’s capital with a group from Knox Elementary School, she brings different emotions and motivations than the idealistic young students, all clad in their new winter clothing and visions of a race-free America. For her and many of the other adults, this is a spiritual journey, both an intensely personal moment and a time to celebrate what they and their forebears suffered and accomplished, as well as to see the opportunities facing a new generation.

Many had grandparents who were born into slavery. They themselves experienced the lash of racism and the Klan. Now they will be watching their children see a black man take the oath of the highest office in the land. “I couldn’t miss this event,” says Hutchins. “I’ve got to do this.”

Hutchins is something of a pioneer herself. She is the first black female pastor of the Clinton Chapel AME Zion Church in Selma, where she has served for three years.

I remember asking as a young girl why this was so important. And [my mother] said, ‘Well, change needs to come so you will have a better life.’ ~ Rev. Frankie Hutchins

The trip for her will be a family affair. Along with her two daughters, Talisa Bolden and Tamira Williams, she’ll be watching her grandchildren, Brenton and Brittney, witness a moment even her mother had never anticipated.

“I remember asking as a young girl why this was so important,” Hutchins says of her mother’s protests. “And she said, ‘Well, change needs to come so you will have a better life.’”

Ruby Walker’s mother was born into slavery, and she worked in Alabama’s cotton fields. She didn’t want her daughter to grow up believing this world of separation was to be borne without complaint. No longer would they bow their heads in submission. They were ready to fight.

It was really the worst year of my life. I was called ‘nigger’ every day. Leaves were thrown in my face. Students in class spat on the seats next to them because they did not want me to sit there. ~ Rev. Frankie Hutchins

Hutchins says she was inspired by her parents at an early age to take up the struggle, too. So when blacks and whites were given freedom to attend any school of their choice, she chose to do what few students in town were brave enough to do. She enrolled in the Albert G. Parrish High School and was soon joined by seven other black students. By the end of her first day, she realized she was in a different world, a world where she was unwanted.

“It was really the worst year of my life,” she recalls. “I was called ‘nigger’ every day. Leaves were thrown in my face. Students in class spat on the seats next to them because they did not want me to sit there.”

She thought it was because she was poor. The other girls had nice clothes. When her father bought her four new dresses, she was certain things would get better. “I went home, and I thought, ‘When I wear this nice, pretty dress to school tomorrow, they’ll accept me just like one of them,’ ” she says of her white classmates. By the time the school bell rang, she’d learned a harsh lesson: Nothing she did made a difference. “It hurt me so bad,” she says.

[The election of the first black president] is the change that Martin Luther King Jr. was talking about, my mother talked about, and my father’s mother talked before. I think it’s the most remarkable thing that could have ever happened in America. ~ Rev. Frankie Hutchins

She came home that night and begged her parents to let her go back to the voluntarily segregated R.B. Hudson High School. “My Dad gave me a hug and he said, ‘Everything’s going to be OK. This is the change that your mother was talking about,’ ” she says.

Mr. Obama’s election has galvanized the city, but few more than this family. “That is the change that Martin Luther King Jr. was talking about, my mother talked about, and my father’s mother talked before,” she says. “I think it’s the most remarkable thing that could have ever happened in America.”

The best thing that could have ever happened

Change has come slowly to Selma. Strip malls and big box merchants have infiltrated the area, and yet a third of the residents live below the poverty line. Schools are segregated by choice now. Especially on Sunday, there’s no blending of races. Sometimes Hutchins stands at her pulpit and looks out over the sanctuary filled with black faces. Across town, whites attend other churches.

All this is one reason Hutchins has been so adamant about attending the inaugural. She wants to honor what change has come about. Initially, she hesitated to take the trip. She knew it would be an arduous walk.

But she’s been exercising and doesn’t want to watch such a historic moment on TV. More than anything, she wants to see the fulfillment of her parents’ labors. “I’m mentally prepared for whatever I have to do, because it’s so important to my family,” she says.

I was still on the phone, and she came running in the room, saying, ‘Mama, mama, he’s been elected!’ And I just threw the phone away and started crying as we rejoiced. ~ Rev. Frankie Hutchins

Hutchins spent the night of Obama’s election phoning back and forth with her daughters. Talisa, the eldest, was working the night shift at Hyundai, and was depending on her mother for updates. Her younger daughter, Tamira, who is 16, was in her bedroom watching the returns as well.

“I was still on the phone, and she came running in the room, saying, ‘Mama, mama, he’s been elected!’ ” she says. “And I just threw the phone away and started crying as we rejoiced.”

She wants her children to understand the struggles her mother and she went through to get to this point. “It’s a moment in history,” she says. “To be there to witness this is the best thing that could have ever happened in our lives.”