Back to school in Texas a year after Hurricane Harvey 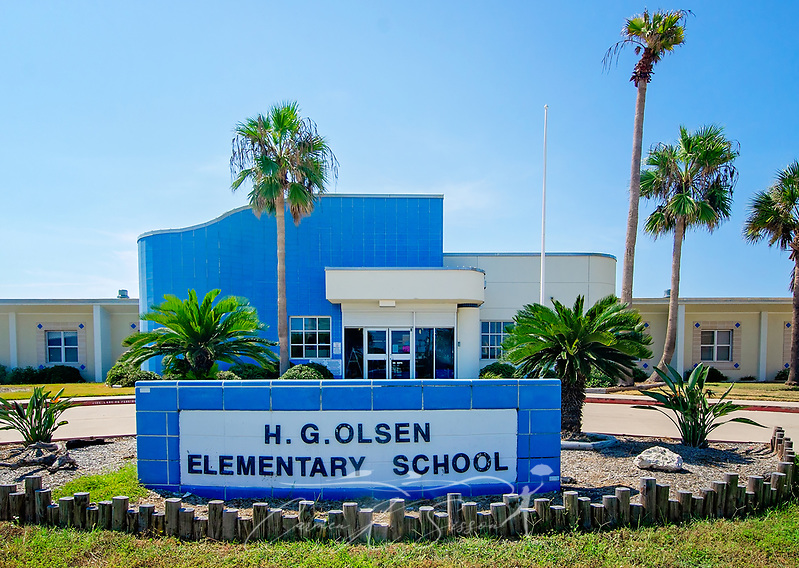 PORT ARANSAS, Texas — It’s the end of the school day, and kindergarten teacher Katy Spofford is all smiles as she makes her way to the lobby of H.G. Olsen Elementary School in Port Aransas, Texas. Outside, the sun glares hot upon bare-backed roofers and hard-hatted road crews throughout this coastal town as recovery continues from hurricane Harvey. But inside, H.G. Olsen is an air-conditioned oasis of color-coordinated calm the first week of school.

The Port Aransas Independent School District is small, with three campuses serving fewer than 500 students, and the Category 4 hurricane took a heavy toll, racking up $12.5 million in damage and leaving no building untouched.

The story was the same throughout Texas, where an estimated 1.4 million students were impacted, and school districts scrambled to make repairs.

In Port Aransas, schools had only been in session a few days when the storm hit, replacing beach-happy bliss with cataclysmic chaos.

The schools suffered such catastrophic damage that they were unable to reopen until mid-October, and every class had to be held in portables. By Christmas, the elementary and high school students were back in their buildings, but the middle schoolers, who lost their roof, were unable to return to their building until the end of last school year.

Mrs. Spofford felt helpless. She had spent a quarter of her life – her entire teaching career – in the classroom at H.G. Olsen, and though she had only spent a few days with her newest students, she worried about them. Her own home had not been damaged, but most of her students and colleagues had lost everything. 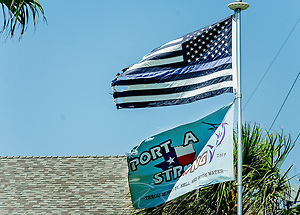 A “thin blue line” flag flies atop a “Port A Strong” flag, Aug. 24, 2018, in Port Aransas, Texas.  “Port A Strong” flags can be seen throughout the Texas coastal town, representing the strength and resilience the region showed after being heavily damaged by Hurricane Harvey in 2017. (Photo by Carmen K. Sisson/Cloudybright)

Many families took temporary residence on nearby Padre Island, which was relatively unscathed, and most Port Aransas students enrolled in the Flour Bluff Independent School District in nearby Corpus Christi. It was reassuring to know that their education was being taken care of, but still, teachers and school administrators worried. Flour Bluff is a massive district, serving 5,700 students – more than the entire population of Port Aransas. How would the children – already caught in an untenable situation – adjust to their new environment?

Port Aransas High School Principal Jim Potts had an idea. He had just taken the helm at the school after vacating his position as an assistant principal at Flour Bluff High School, so he knew the challenges the students from the smaller schools would face, and he still had a close working relationship with his former colleagues.

Together, they devised a plan – Flour Bluff would tend to the educational needs of the K-12 students, but the Port Aransas educators would remain a visible presence, keeping their students grounded and up-to-date on the recovery progress.

On the first day of class, the Port Aransas principals and teachers went to their respective schools in Flour Bluff, greeting their students and doling out equal amounts of hugs and reassurance. Some, like Mr. Potts, showed up every morning to say hello and answer questions.

Others, like Spofford, volunteered for daily lunch duty. An outsider might have seen a soft-spoken teacher helping students open milk cartons, but being there every afternoon helped her, too.

“Even after only three days together, they were my babies, and it was hard to let them go,” Spofford says, clutching her hands to her heart. “Kids are very resilient – they love their teachers and they’re excited to go to school. But we knew the most important thing was to love on the kids.”

Potts feels the interaction was equally beneficial to the older children, who looked to him for daily progress reports.

“Emotionally, it helped our students to see their teachers in the hallways and have them say, ‘Hey, how are you doing?’ or ‘We’re almost there,’ ” he says. “It gave them a sense of hope of when they could come home.”

“Emotionally, it helped our students to see their teachers in the hallways and have them say, ‘Hey, how are you doing?’ or ‘We’re almost there.’ It gave them a sense of hope of when they could come home.” ~ Port Aransas High School principal Jim Potts

Still, they had to maintain balance between encouragement and coddling, so they were careful to remain in the background, allowing the Flour Bluff teachers to do their jobs, even when teaching styles differed.

The students handled the transition well. Although the Texas Education Agency gave a special accountability reprieve to 109 school districts impacted by the hurricane, Port Aransas didn’t need it. They, along with Flour Bluff ISD, achieved an “A” on the state’s accountability report card, with Port Aransas High School achieving seven distinction designations for academic achievement in the 2017-2018 school year. 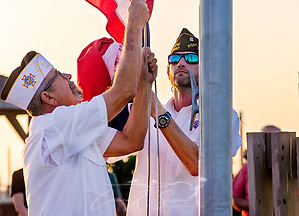 The two districts remain close, as do many of the students. The cross-country track teams recently met for breakfast and a morning run along the beach. Potts still talks to his former colleagues often, and teachers from both districts swap stories about “their” students when they run into one another at H-E-B, the local grocery store. In the foyer at Brundrett Middle School in Port Aransas, more than 30 flags from schools across the country serve as a daily reminder to students of everyone who sent donations and helped when they were in need.

Every floor tile, every shingle, every steel beam, every desk – they’re all held with new respect. Even school rules are being upheld cheerfully in the 2018-19 school year, which started Aug. 20, including new ones addressing campus safety.

“Our kids don’t take anything for granted, because they know anything can be taken away at any time,” Potts says. “The students aren’t bucking us on doors being locked. They’re not questioning being on time or being accountable, because they know we care about them.”

Even the youngest have found new gratitude for everyday things. Last Thanksgiving, Spofford gave her class a routine assignment – write about the thing for which they were most grateful.

A place to shelter during the storm. A place to sleep when the waters had receded. A place to call home in this close-knit community.