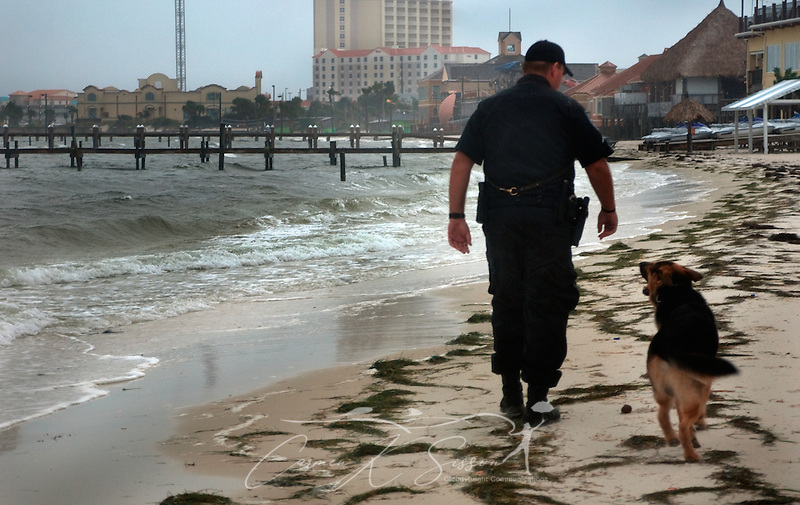 Escambia County Deputy Sheriff Patrick Frazier walks along Pensacola Beach with his dog, Nido, Nov. 9, 2009 in Pensacola, Fla. Private citizens across the nation are showing public support for their local law enforcement officers through movements like Safe Harbor Initiative, which encourages citizens to paint blue lines on their curbs to show support for police.  (Photo by Carmen K.Sisson/Cloudybright)

In fact, the town has used up 400 rolls of blue reflective tape so far, as part of a growing effort to counter what people see as a backlash against law enforcement officers.

With all that’s been going on, our spirits have been kind of down. I used to love this job, but here lately, it’s been depressing. It’s really a boost to see all the support. ~ Columbia Police Chief Mike Cooper

Columbia Police Chief Mike Cooper used to say he would wear his badge until he was so old he had to hobble into the police station using a walker, but lately, he is not so sure. He rarely leaves the house when he is off-duty. When he does, he constantly scans his surroundings, hyper-vigilant to threats.

“With all that’s been going on, our spirits have been kind of down,” Chief Cooper says. “I used to love this job, but here lately, it’s been depressing. It’s really a boost to see all the support.”

Over the past year, a series of high-profile deaths of black Americans at the hands of police has sparked a widespread protest movement, federal and state investigations, and a call for community policing, more transparency, and a move away from practices that some say unfairly target minorities. But, critics say, it has also sparked an unfair bias against police officers, the vast majority of whom are doing their best to protect citizens. So far, there is little data to support evidence of a “war on cops,” as some have called it, but officers in cities across the country have said they are on edge and morale is low.

To all law enforcement who see this line, know that the residents of this home appreciate your service and dedication to keeping the peace. Know that when you enter the neighborhood and see these lines that you are not alone or without back-up. ~ Safe Harbor Initiative

San Antonio native Anthony Welichko became involved after the fatal shooting of a Houston police officer last month. Harris County Sheriff’s Deputy Darren Goforth was pumping gas into his patrol car when a gunman approached from behind and shot him. He died at the scene.

Mr. Welichko sprayed a thin blue line onto his curb and wrote a Facebook post explaining its meaning: “To all law enforcement who see this line, know that the residents of this home appreciate your service and dedication to keeping the peace. Know that when you enter the neighborhood and see these lines that you are not alone or without ‘back-up.’ ”

More than 85,000 people shared his Facebook status. A movement was born.

People nationwide are offering encouragement in other ways as well, from buying officers’ lunches to burying department counters in a deluge of cookies, cakes, and home-cooked meals. The movement reaches beyond the blue line to touch hearts in whatever way feels comfortable, whether that means painting curbs or simply offering first responders a cold glass of water on a hot day, says Joe Ernst, who is handling media relations for Safe Harbor Initiative.

In Columbia, every day more people call to ask about ways to show support, says Sherie Cooper, Chief Cooper’s wife and the state director of Wives Behind the Badge, a nonprofit organization dedicated to supporting law enforcement officers and their families.

We want any responder out there to understand that they have a friend. It’s not ‘black lives matter’ or even ‘blue lives matter,’ it’s ‘people matter.’ Let’s not divide. ~ Joe Ernst, Safe Harbor Initiative

“We want any responder out there to understand that they have a friend,” says Ernst, who painted his curb and is considering hanging blue lights in his yard or using a blue bulb in his porch light. “It’s not ‘black lives matter’ or even ‘blue lives matter,’ it’s ‘people matter.’ Let’s not divide.”

Citizens around the country are getting involved, but the movement has not caught on everywhere.

Patrolman N.C. Hall works in the South Precinct of Birmingham, Ala., where residents say you are more likely to see a heroin addict than a blue ribbon or line. Patrolman Hall has not seen visible signs of support while cruising the streets, and he thinks he knows why: People are afraid. They don’t want to become the targets of anti-police sentiment.

Last month, a Birmingham officer stopped a suspect in connection with a series of burglaries, and during the ensuing struggle, the suspect took the detective’s gun and beat him unconscious. Bystanders reportedly did not intervene. Instead, they posted photos — many with anti-cop captions — to Facebook and Twitter.

It’s a very hard time to be a policeman in the nation. It’s just nerve-wracking. I try to think that if something did happen to me, I would have enough support in my neighborhood and maybe they would try to help me. ~ Birmingham police officer N.C. Hall

Hall does say that more residents thank him privately, which makes the day better. Still, he would like to see more public acknowledgement.

Patrolman Hall, who is in his mid-40s, says he had planned to retire at 26 years but believes he will hang up his badge two years from now, on his 20th anniversary in law enforcement. The job has changed, he says. He has started wearing his bulletproof vest even when off-duty.

“It’s a very hard time to be a policeman in the nation,” Hall says. “It’s just nerve-wracking.”

Hall draws upon his love for the profession and the positive feedback he receives to keep him going on the tough days.

“I try to think that if something did happen to me, I would have enough support in my neighborhood and maybe they would try to help me,” Hall says. “Whether that would happen, I’d like to know.”

Police officers have expressed gratitude for the kind intentions, but some have cautioned that the “back-up” needs to remain in the form of moral support and baked goods – not patrolling the streets or attempting to intervene physically.

And not every police department wants citizens to get out the blue spray paint. In Cedar Rapids, Iowa, the police have asked residents to resist painting curbs. Local utility workers often use blue paint on streets and sidewalks to mark buried lines. “But I would like to express my gratitude and appreciation to citizens who show police officers their support,” Police Chief Wayne Jerman told ABC affiliate KCRG.

Organizers with Safe Harbor Initiative say they hope their message will continue to spread so officers will feel supported by the communities they serve.

“Let them know not everybody is against them,” Ernst says. “Law enforcement officials have a dangerous, difficult job. They go out there and put their lives on the line. If you do support the police, don’t be afraid to show it.”