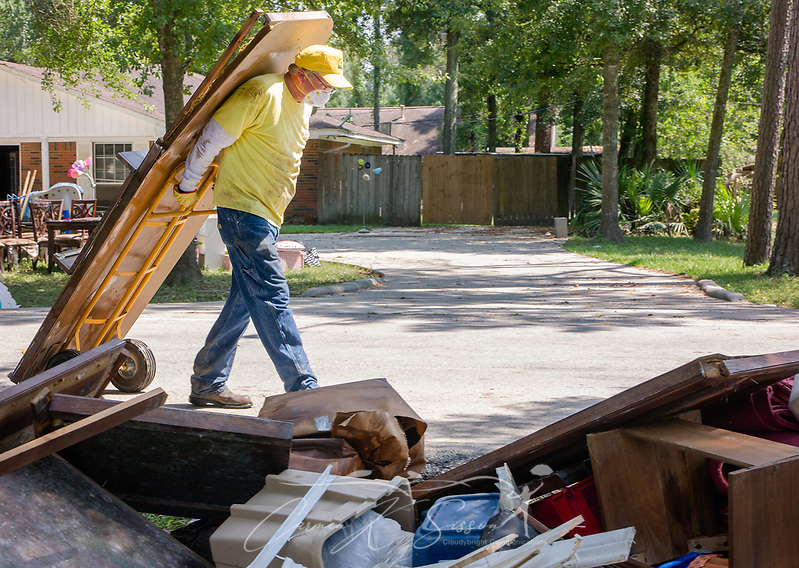 Southern Baptist Disaster Relief volunteer Neal Allison, of Central Baptist Church in Thornton, Texas; carries a flood-damaged door to a debris pile, Sept. 6, 2017, in Houston, Texas. Homeowner Paul Matlock’s home was inundated with more than six feet of water when Hurricane Harvey dumped more than 51 inches of rainfall in mid-August. Approximately 70 people died in the U.S. due to the hurricane and flooding, but that number is expected to rise as water levels fall, allowing rescuers to reach more areas. (Photo by Carmen K. Sisson/Cloudybright)

HOUSTON — As Category 4 Hurricane Harvey crept across Texas at an agonizing two miles per hour in mid-August, the rain — more than 51 inches — kept falling, and the rivers and bayous kept rising.

The water rose quickly in downtown Houston, climbing to almost touch interstate exit signs and inundating local businesses, killing more than 70 people, necessitating more than 75,000 rescues, and causing up to $190 billion in damage. An estimated 27 trillion gallons of rain — enough to fill the Houston Astrodome 85,000 times — fell in Texas and Louisiana over a six-day span.

In Houston’s neighborhoods, the flood’s toll becomes heartbreakingly clear. Many homes remain underwater, and rescue efforts continue. In locations, where the water has receded, fetid muck replaces it, slickening the floors and coating the walls. As the days pass, a mounting pile of debris lines the curbs, almost obscuring the homes from which it came. 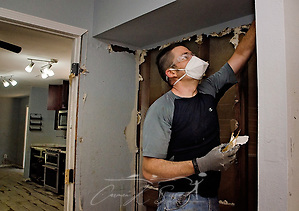 Houston homeowner Paul Matlock, 73, was sitting in his yard, staring into the distance, overwhelmed, when Southern Baptist Disaster Relief (SBDR) volunteers arrived. The flood waters had climbed more than six feet inside his home, and it was chest high when he managed to escape with his wife Diana, 63, and their toy fox terrier, Mia. They had flooded twice before, but never this badly. They knew when they left that they would probably lose almost everything they owned. And the sight when they returned confirmed it.

“I spent three days trying to figure out what I had done to make God so mad at me,” Matlock said as he watched SBDR volunteers carry items to the curb. “I’ve lived a pretty moral life. And (the hurricane) affected all of my immediate family and my wife’s family in Louisiana.”

His spirits were immediately lifted when he saw that he had not been forgotten by God — in fact, he was being helped yet again.

He was shocked to see the SBDR trucks roll into the driveway, and his first thought was to grasp the volunteers’ hands and join them in a prayer of thanksgiving. 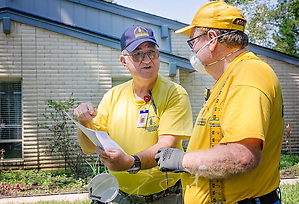 It was overwhelming, said SBDR unit leader Brian Batchelder, whose unit is with the Southern Baptists of Texas Convention. Though Matlock knew what needed to be done, he had no idea how he was going to do it alone.

“We provided the how,” said Batchelder, who attends Broadview Baptist Church in Abilene, Texas. “People need to see Jesus in the middle of a crisis. That’s why we come — so people can see what Jesus means to us and how He can help them.”

When Matlock teasingly asked volunteers not to scratch his ruined truck, Batchelder knew the homeowner was going to be okay.

A smaller moment encouraged volunteers Linda Parker and Glenda Warren, both of Mission Dorado Baptist Church in Odessa, Texas. When they arrived with the SBDR mud-out team, they found Matlock almost in tears and dangerously despondent. No one had touched anything, and the stench of mud and mold was overwhelming, even with a mask.

The only thing Matlock wanted to find was his father’s 1942 class ring from Oklahoma Baptist University. Matlock kept it on his nightstand in a handmade wooden box, but everything in the room was upside down and dispersed throughout the house. Together, they scoured the room, finding the ring as well as a large container filled with photographs. They had been untouched by the flood waters.

“It’s overwhelming,” Warren said. “You normally have a contained area, but everyone is spread so thin. Just the fact that someone was doing something took the burden off his shoulders.” 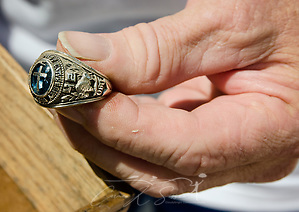 SBDR volunteers say they try to serve as the hands and feet of Jesus, easing the spiritual burden as well as the financial.

“These folks have lost everything,” Batchelder said. “It just breaks my heart to take all their stuff to the curb, and to have to pay someone to do that …”

Batchelder’s voice broke as he recalled his first volunteer experience, which was on the Mississippi Gulf Coast following Hurricane Katrina. At the end of every project, Batchelder and the volunteers sign a Bible and gift it to the homeowners. It is a tangible reminder that they are never alone.

“This isn’t about us—it’s about Jesus,” he said, gazing at the gold-shirted volunteers working in the house and debris-laden yard. “We’ll be gone, but He’ll still be here.”

Matlock and his wife were unable to escape with anything but a few pieces of clothing. Their medications and precious mementos are gone. What little remains of flood victims’ lives is under constant threat by looters. Three homes have been looted in Matlock’s neighborhood, but local law enforcement has increased patrols in the area, and Matlock believes his home will be safe.

SBDR volunteers expect to be stationed in Texas for many months as assessment and recovery continues. 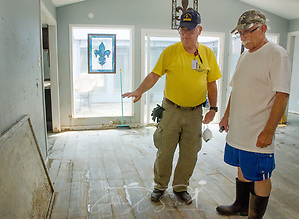 The scope of the devastation is staggering. Houston is the fourth largest city in the nation, bigger than the st

ate of New Jersey with a population of more than 2.3 million within city limits and 6.5 million throughout the metro area. Across the state, Hurricane Harvey affected more than 6.8 million people in 18 counties. As the days pass, the damage and death totals continue to rise.

So, too, do the number of volunteers. In Matlock’s area, SBDR has partnered with Champion Forest Baptist Church. A church-wide call for volunteers supplemented the ranks by more than 2,000 people. Together, SBDR and Champion Forest have cleaned more than 400 homes, with many more scheduled for the days to come.

“We didn’t get all of our essentials, but we’re safe,” Matlock said. Despite this third flood, he and his wife intend to stay and rebuild.

That is not the case for neighbor Christine Brown. A sprawling oak tree shades her yard, and beneath it, she has erected an American flag and a sign, “Yard of the Month.” It is barely visible behind the debris that lines her curb.

Tears welled in her eyes as she pointed out a soaked pencil drawing her daughter had given to her. This is her third flood also, and this time, it’s too much to bear.

“I love my house,” she said. “But I’m leaving. I can’t go through this anymore.”