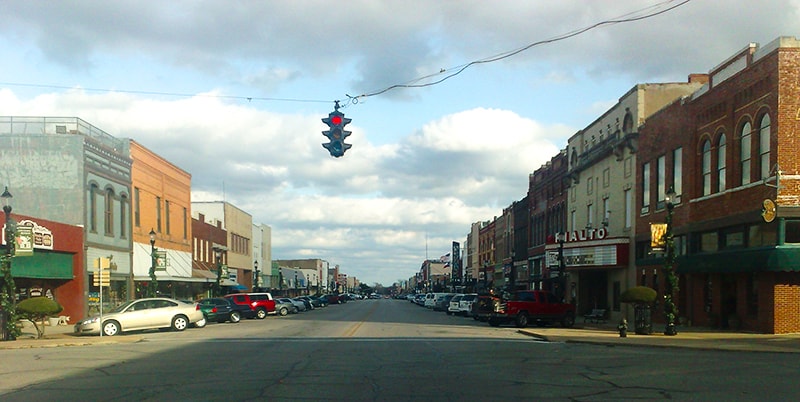 North Texas took the brunt of the storm as two confirmed EF-1 tornadoes skipped across the cities of Denison and Collinsville, damaging an estimated 50 homes and destroying seven. The narrow path of the tornadoes, which averaged between 125 and 200 yards wide and two miles long, spared many homes said meteorologist Tara Vudzik of the National Weather Service.

Denison Fire Chief Gordan Wager said he’s grateful there were no injuries or fatalities. More than 80 members of the city fire, police, and public works departments worked throughout the night in intermittent rain, barricading roads that were flooded or covered with debris, and responding to emergency calls. One elderly resident was rescued from her home, which he said sustained minimal damage.

All the people we’ve encountered are taking care of themselves and helping each out. It’s kind of phenomenal. ~ Cathy Howard, Texoma Red Cross

No churches in the two cities have requested aid, but pastor Michael Mattil of Grace Lutheran Church said two members of his congregation were affected, and volunteers spent yesterday and today helping remove limbs and debris.

“They were lucky,” he said. “Homes just two doors down were obliterated.”

He said because of the swift response by the American Red Cross, which spent Tuesday and Wednesday making drive-by assessments and distributing water, meals, and tarps, no further assistance has been needed, though his church will remain on standby.

“We’ve put a few people in motels, but for the most part, residents are staying with their homes,” said Cathy Howard of the Texoma Red Cross. “The majority of the area hit involved brick homes and residents who had insurance, so we’re not doing a lot of financial help at this time.”

She estimated 90 families will need some form of assistance, but said neighbors are working together to help with cleanup.

“All the people we’ve encountered are taking care of themselves and helping each out,” she said. “It’s kind of phenomenal.”

That was the case in nearby Collinsville, which is a predominantly rural area of Grayson County and a place where everyone knows one another.

We saw three tornadoes touch down — two near the building and one in the distance. It was the closest I’ve ever been to a tornado. ~ Kelly Taylor-Forgar, American Red Cross, Central Louisiana chapter

Kelly Taylor-Forgar, emergency services director of the Central Louisiana chapter of the Red Cross hopes she never again experiences what she went through Monday night. Red Cross volunteers reported 42 families affected and four homes destroyed in La Salle and Rapides parishes. Meanwhile, their colleagues found themselves in need of assistance as well when high winds slammed trees into their office and tore away part of the roof. Taylor-Forgar, who was in the building at the time, said even though she grew up in Texas and spends her days assisting families touched by natural disasters, it was frightening to witness a storm in progress.

“We saw three tornadoes touch down — two near the building and one in the distance,” she said. “It was the closest I’ve ever been to a tornado.”

The National Weather Service has not yet confirmed the damage as tornadic, but for the families left picking up the pieces in Texas and Louisiana today, the final assessments make little difference.