What Alabama kids take from Obama’s Inauguration, Knox Part 3 of 3 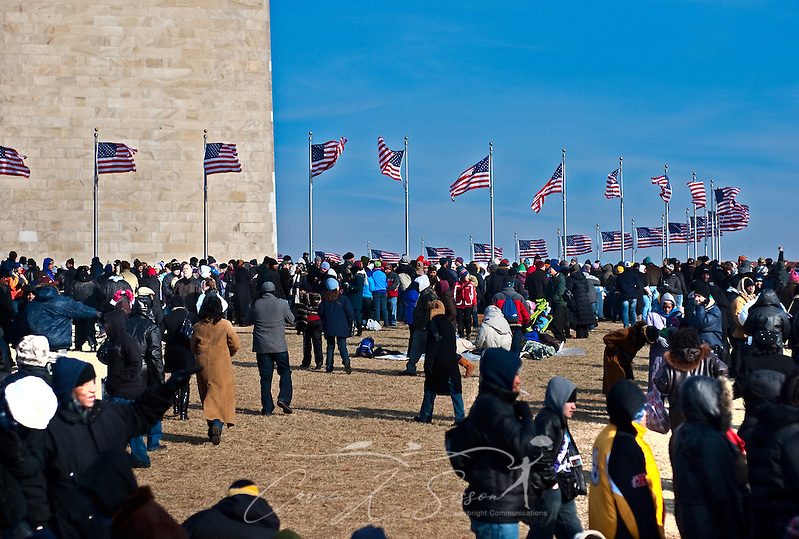 WASHINGTON, D.C. – Brenton Sanders will always remember the import of the moment – both the poignancy and enormity of the first African-American taking the oath of office. But he will be carrying home something else as well: the civility and kindness of the throng of nearly 2 million people braving brisk temperatures to witness a piece of history.

The 16-year-old African-American from Selma, Ala., didn’t expect to see crowds of whites and blacks standing shoulder to shoulder, smiling, happy. He didn’t expect them to even look him in the eyes, let alone say, “Excuse me.” To him, the chemistry of the crowd may have been as much of an affirmation of the spirit of the moment as what was being expressed on the bunting-bedecked terrace a long – very long – distance in front of him.

I’m not going to say I had fun. But it was the best experience ever, if that makes sense. ~ Tamira Bolden, 16

“I think things are going to get a lot better,” he says with a blend of conviction and hope.
Brenton’s memories of the historic time on the National Mall are echoed by many of the adults and students from Selma who journeyed to the nation’s capital to see the swearing in of Barack Obama as the 44th president.

Every generation has its defining moments, ones that elicit the refrain, “Where were you when…,” whether it was Martin Luther King Jr.’s speech in Washington, or the first moon walk, or 9/11. For the students of Knox Elementary, this will be one of theirs, even though many of them aren’t yet fully aware of it.

Yet as they head home, they are reveling in the minutiae of the event even while working through its magnitude – a time of benumbed fingers and soaring rhetoric, of long bus rides and mass brotherhood.

“I’m not going to say I had fun,” says Tamira Bolden, 16. “But it was the best experience ever, if that makes sense.”

The adults knew it would be a life-changing experience. Few of Knox Elementary’s children had ever strayed beyond the perimeter of Selma. For most, Washington, D.C., was a strange, exotic place. They knew the president lived there. They could identify the White House – sort of. They had heard of the National Mall, though they weren’t quite certain of its purpose – park or shopping center?

Yet they could tell you all about the man about to be sworn in as president, from his children’s names to the dog breeds he’d considered adopting as primoris canis. Barack Obama was very real to them, and they were excited to see his inauguration, whether it happened outside among bicyclists and joggers, or inside between Sears and J.C. Penney.

I’d never been here before. If you were there, you just felt this rush from the people. ~ Brenton Sanders, 16

They expected to leave with Obama buttons and pennants, or perhaps one of the dozens of “I Was There” T-shirts. But no one, not even Knox principal Joslyn Reddick, could have anticipated the overwhelming surge of hope and patriotic pride the 43 students and parents are carrying back to Alabama. Ms. Reddick spent almost a year planning this trip, gathering donations and trip agendas, worrying and praying over her young charges.

She wanted them to witness a moment in history that would never happen again – the first black man laying his hand upon the Bible, pledging his fidelity to our nation – even if the lines were flubbed.

They knew it would be much colder than the South, so they prepared for it by outfitting the youngsters with enough apparel accouterments to survive a wilderness trek through the Yukon. The mittens, earmuffs, parkas, and pocket hand warmers proved little help, though, against the frigid 19-degree temperature.

Yet, afterward, the students agreed: It never would have been the same if they’d watched it on television. “I’d never been here before,” says Brenton. “If you were there, you just felt this rush from the people.”

A walk to remember

It didn’t start out that way. Students rubbed their eyes and stumbled down the stairs shortly after 3 a.m. Tuesday, climbing onto the warm buses and promptly falling back asleep for the long ride to Washington. At 5 a.m., they arrived at the corner of L St. and First and tumbled out into the frigid air. The capitol’s dome, splashed in shades of predawn blue, immediately greeted them, and all seemed to perk up.

It was very cold, and we walked about six miles. I went through a lot of pain to get there, but looking back, that’s probably not going to matter. I didn’t see any racial tension going on. That was a shocker. ~ Ashley Simpson, 17

But after a few minutes, the brisk cold became biting, and the light crowd intensified. By daylight, they were trapped in a sea of people, with even adults and teenagers clutching one another’s hands to keep from getting separated.

Reddick patrolled the outer edges of the group. “Knox, KNOX!” she yelled. “Keep to the right! Get out of the street!”

In the beginning, it was easier to stay together because most of the children and chaperones donned bright yellow scarves. By the time they rounded the first corner, they’d separated, but the error was quickly corrected and they continued walking.

“If I didn’t love Joslyn, I wouldn’t be doing this,” one parent muttered.

“Ain’t that the truth,” another answered.

The crowd soon swelled, and all anyone could do was press forward. People began jumping barriers, trying to reach the National Mall. One group was flagged away by a police officer, only to find themselves facing a hedge of holly at the Department of Agriculture.

For one small Knox group, it took nearly four hours to reach the mall. Who knew where the others were. Things weren’t turning out as they’d planned.

It was an experience of a lifetime, something you will never ever forget. I didn’t expect to see that many people there. There were tears shed, and people hugging. I shed some tears, too. ~ Dorothy Hatcher

“It was very cold, and we walked about six miles,” says Ashley Simpson, 17. “I went through a lot of pain to get there, but looking back, that’s probably not going to matter. I didn’t see any racial tension going on. That was a shocker.”

All eyes turned to the monitors, and a cheer erupted as Obama took the stage. A murmur swept through the crowd as he promised change.

“It was an experience of a lifetime, something you will never ever forget,” says chaperone Dorothy Hatcher. “I didn’t expect to see that many people there. There were tears shed, and people hugging. I shed some tears, too.”

If the melting pot of people at the mall Tuesday – smiling, linking arms, waving flags, sharing blankets, lifting their voices in song – is any indication, the Knox students may be right: Change can happen, one American at a time.

“Everyone had that hope, that sense of possibility,” says Talisa Bolden. “Now we have something to look forward to.”